For an increasing number of elderly Kolkatans, ageing doesn’t necessarily mean retiring from the good things of life.

Many are learning about computers and smartphones, and even rediscovering forgotten passions, like playing a musical instrument… things that life had pushed on the back burner, write Saibal Sen and Kamalendu Bhadra

Sixty, they say, is the new 40. But to these senior citizens, it might as well be 14 -in a growing trend, more and more retired or elderly Kolkatans are picking their childhood passions and signing up for classes. And they are loving it! Age has no effect on 58-year-old Lily Chowdhury’s spirit. She could have spent her time idly at her Lake Gardens residence with her husband, waiting for a call from her children -and grandchildren -who are settled abroad, with little else to do. “At my age, the usual routine for most is to stay home and play the perfect granny ,“ says Lily .Not for her, though.

Like any middle-class Bengali family , Lily too had learnt painting and playing music in her growing-up years, a quiet love she had to lock up and stow away after she got married and had children. Always, her priorities were running a home and focusing on her children’s education. One day , she gave her much-cherished synthesizer to a little child in the extended family . This gesture summed it all up.

“But as our children grew up and settled, they needed little hand-holding. Yes, deep down you keep longing to be with them. But then they need to live their life too. Frankly , the problem with us (Lily and her husband) is loneliness. That alone triggers a stream of negative thoughts. I knew I had to break this vicious cycle. I took up painting and playing my synthesizer once again. Now, I’m more busy than my children,“ she smiles.

Lily’s instructor Bidyut Banerjee -several years younger to her -is effusive in praising her.“I am simply loving the experience. They just need a bit of help. It is like discovering old notes, the strokes of the paint brush they had long forgotten.The enthusiasm and happiness simply make this experience different from teaching my younger students,“ he says.

It isn’t about Lily alone. There are many , having retired now, increasingly taking up classes to rekindle their old passions. The reasons are different, though.

In fact, this trend has also spurred some unique social entrepreneurship initiative. Take for example an initiative by the initiative of Support Elders and Calcutta Metropolitan Institute of Gerontology (CMIG). It has tied up with the UK-based The University of the Third Age (U3A) movement, which provides expertise in life-enhancing and life-changing opportunities where retired and semi-retired people come together and learn together.

Apratim Chattopadhyay , co-founder and CMD, Support Elders Pvt Ltd, adds: “Our endeavour to enhance the quality of life of the elders has got a major fillip. It is very enriching to see the elders’ enthusiasm and keenness to pursue interests and hobbies that they had never had time for during their working lives. This helps them lead independ ent and meaningful lives at home, which is one of our core objectives.“

On the other hand, Deep Probin Poriseba stresses on companionship. “Members are encouraged to take up old interests like chess, cards, bookreading, music, morning and evening walks and yoga. They are also given technological assistance like how to use laptops, desktops, tablet computers and smartphones. And most importantly , they are familiarized with the internet, email and Skype,“ says founder-director Shirsha Guha.

Hence, the bi-weekly Support Elders workshops at Lake Gardens resemble more of a co-ed nursery classroom than anything else. Tapas Sengupta, 62, has taken up learning the keyboard with enthusiasm. “I was into sales and spent a lifetime in it, giving it all I had. Though I loved music, I never really found time to learn it. Now, the only thing I don’t lack is time. Having learnt of this place, I came here and have been hooked,“ he says.

Likewise, Shipra Chattopadhyay has returned to her world of hues -watercolour and acrylic paint. “I’ve always loved painting. Finally I have time for it.“ Moreover, Shipra also enjoys the companionship and bonding with the other “students“.This is also what brings 82-year-old Deepa Sanyal to workshop regularly . Her passion is computers.“My first worry while coming here was what would happen if I suddenly fell ill. But now I know there are friends who will help me in need.“

Deepa’s passion to learn computers is shared by Papiya Roy , a recently retired state government doctor. Roy , between treating patients for free, takes out time twice a day to learn about gadgets -something her grandchildren at adept at.

All this is significant. While other Indian cities grow younger, the 60-plus population in Kolkata is now the largest in the country . Conversely , the proportion of 20-year-olds -the biggest population segment across all metros -is alarmingly low here.

This ratio of youngsters might indicate that more and more of them continue to migrate for jobs and education. On the other hand, Kolkata has the highest percentage of the 30-59-year-old (employed) category .

Economist Aviroop Sarkar finds this an interesting trend. “The 20-29 year populace is less (than other metros), while the 30-59 years populace is more. The former is the student group and the other, the working group. Given the data, it would be wrong to generalize that people are leaving Kolkata for jobs. Perhaps, youngsters are moving out for education but that’s about it,“ he said. That Kolkata has lagged behind in setting up private engineering and medical colleges perhaps defines this trend, the economist observed.

Jadavpur University economist Amit Kundu is clear about laying more emphasis on the 30-59 agegroup. “This is the working age-group. These days, the average age to get a job is slightly more than what it was earlier. As long as this indicator is stable, I think we are doing well. My only concern is the much larger 60-plus age group,“ Kundu says.

These senior citizens -full of lively energy -have surely displayed beyond doubt that retirement to them isn’t a sunset point. Rather, it’s the dawn of a brand new day . 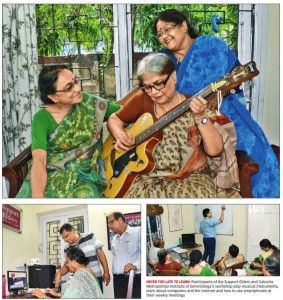 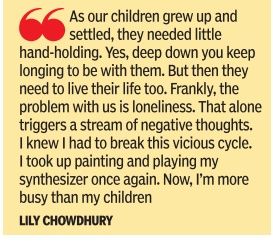